With virtual reality and augmented reality, the so-called XR technologies enable a high degree of immersion: users can immerse themselves in virtual worlds and experience content almost vividly and personal, which would otherwise not be available at all or only with great effort and cost. Possible applications are very diverse: travel to existing or invented places, communication and interaction with distant people or fictional characters, or even a direct, interactive product experience.

Under the collective term virtual reality (VR), applications are summarized, which offer the user a completely virtual world of experience, into which they can fully immerse themselves. Such applications have been promoted for several years, especially by the games industry, and have led to the fact that hardware, which used to be very expensive, is now widely used and relatively inexpensive. With VR systems, for example, virtual prototypes can be experienced or reality parameters such as dimensions can be better communicated. The technology covers many areas and use cases: from an interactive user experience as a showcase for marketing purposes, to simulations or training scenarios for the safe training of complex work tasks, to medical applications (e.g. against vertigo or amblyopia).

Augmented reality (AR) refers to applications that enrich reality (such as a live camera image) with virtual 3D objects. This technology is also widely used and supported by every manufacturer with Software Development Kits (SDKs). These include, for example, Androids ARCore or Apple's ARKit, but also cross-platform solutions like Unity3D or Wikitude. With AR, for example, interactive manuals and product catalogs can be realized, or additional information for drivers can be displayed in the HUD. Integrated sensor technology such as camera arrays, depth cameras, or acceleration sensors can even create a three-dimensional image of the environment in real time. It can then be used for interaction between virtual 3D objects and real objects.

With Web3D technology, three-dimensional content such as components, constructions, or buildings can be used in web browsers such as Google Chrome and Mozilla Firefox without the installation of special plug-ins. This technology allows for a lot of information to be displayed more intuitively or even completely immersively, e.g. via a Google Cardboard, in combination with 2D content such as text.

Our services in XR technologies

As a service provider for individual software solutions, jambit has expertise in many different areas of software development. For over 20 years, we have been realizing innovative projects for world-renowned customers. When working with the relatively new XR technologies, we particularly benefit from our expert knowledge and many years of experience in the areas of mobile development and cloud applications. In recent years, companies such as BMW or Telekom have relied on jambit's expertise for their XR projects.

As early as 2015, jambit realized completely new augmented reality functions for the BMW Group with MINI Augmented Vision. At the Auto Shanghai 2015, this concept of AR glasses as a support for the driver was presented to the public. Visitors could experience it in a booth demonstrator. This was the successful and inspiring result of a development process to whose success jambit has significantly contributed. Besides, jambit implemented the Fitometer project for an automotive supplier. The Fitometer helps the driver to check whether larger consumer goods fit into the trunk of his own car while they are shopping. In addition, the app uses image recognition to support loading and provides practical instructions (in AR) in which order to load the goods into the trunk.

In 2017, jambit developed an innovative augmented reality showcase for Telekom for the Mobile World Congress in Barcelona to demonstrate the possibilities of the upcoming 5G network standard. A Carrera train was augmented using Microsoft Hololens and a back-end server over the 5G network with AR and mixed reality. The players could see extensive landscapes in and around the Carrera track and follow with AR markers above the cars how fast and almost latency-free the 5G network worked.

For our VR and AR projects, we rely on common technologies like Vuforia, Unity3, ARCore, or the ARKit. We advise you individually to find the best solution for your project. The ARKit from Apple is a very powerful SDK, with which you can quickly achieve first results, but you are limited to iOS. With Vuforia or Unity3D, you can work cross-platform, but not all sensors can be used. Therefore, it is always necessary to weigh up depending on the respective use case.

Our services for tailor-made VR and AR solutions:

Powerful end devices and fast network technology make it possible to interact with the environment in real time. Modern image analysis makes it possible to recognize movements and gestures of the user and thus to realize a simple, intuitive operation. Likewise, objects and the environment can be recognized and valid interactions or contents for this context can be presented via AR. Additional information can be displayed in real time and places can be experienced, for example in a museum, during a demonstration of (vehicle) functions, or as interactive training of an employee in production, which presents the individual work steps and instructions for action in an immersive manner.

jambit references in this field:

Augmented reality takes “Earth Plastic View” to the next level

By using widely available sensors on mobile devices, a variety of scenarios for data collection and processing can be realized. Starting with simple image algorithms for bar or QR code analysis, complex AI algorithms can also be used for image analysis today through cloud connection.

But also the processing of image content on the server is enabled by new low-latency network technologies (e.g. 5G). This means that complex, computationally intensive algorithms or storage-intensive databases can be used even with a lightweight end device. The library OpenCV offers a variety of methods in image processing and artificial intelligence.

These new possibilities in image recognition and processing open up a wide range of potential in the use of XR technologies. Enhanced motion and object detection enables use cases such as parking occupancy detection or the detection of driver status (awake, tired, distracted).

Entire 3D worlds can be built in virtual reality, which allows users to immerse themselves. When modeling these 3D models, a close interaction between the design department and the development department is necessary. To be able to display 3D models with high performance and as close to reality as possible, depending on the end device, the data must often be prepared and adapted to device-specific limitations such as data quantity, data format, or shaders. In most cases, complex original data has to be prepared for use or re-modelled as 3D copy. With our experts for user-centered design we at jambit have the advantage of being able to implement design and adjustments quickly and in-house. This results in short ways in conception and adjustments and saves time in the project.

A digital twin describes the concept of digitally representing a real object (e.g. a machine or a building). The characteristics of this digital twin can be very different: from single sensor data for the automated monitoring of parameters, to an interactive 3D model, which e.g. allows interactions to control the real object. Even objects that do not yet exist can be mapped as digital twins, for example to simulate a certain behavior. During the development of a digital twin, a large amount of data is collected, stored, and managed. Cloud-based databases are usually used for this purpose. 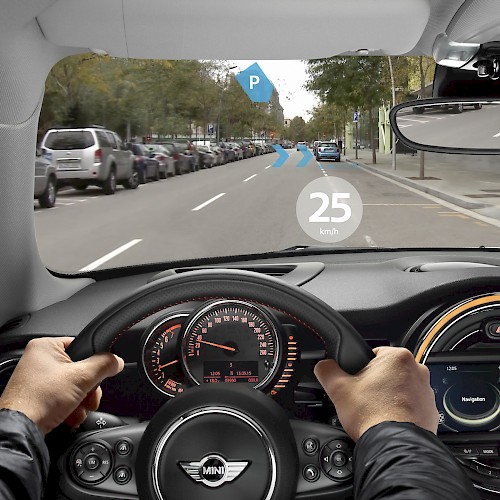 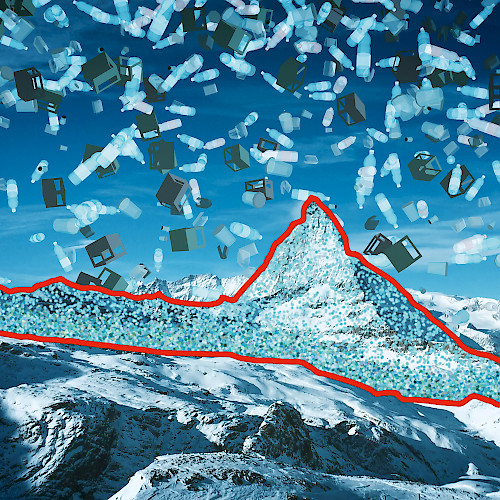 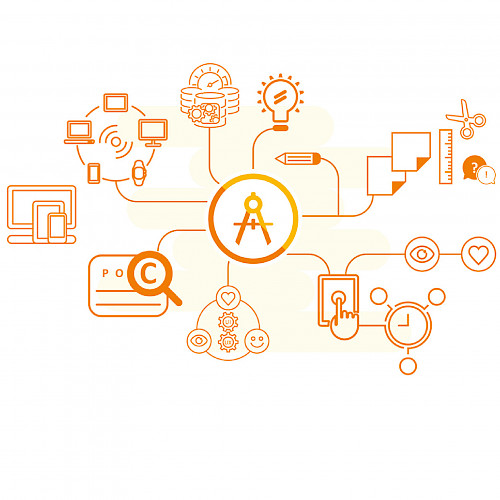 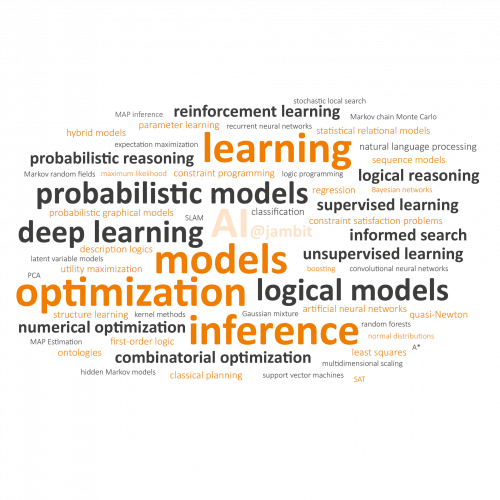 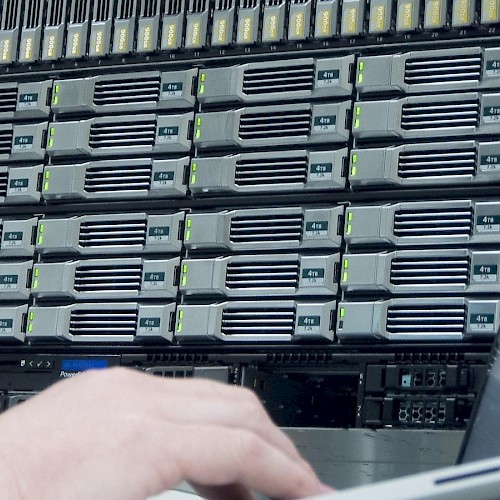 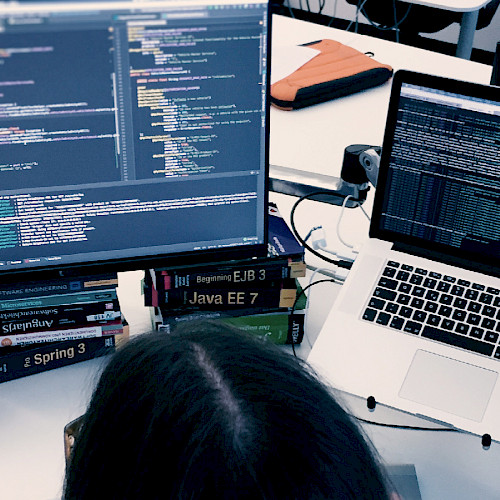 Are you looking for a competent service provider for your VR or AR project?
Just contact us now!